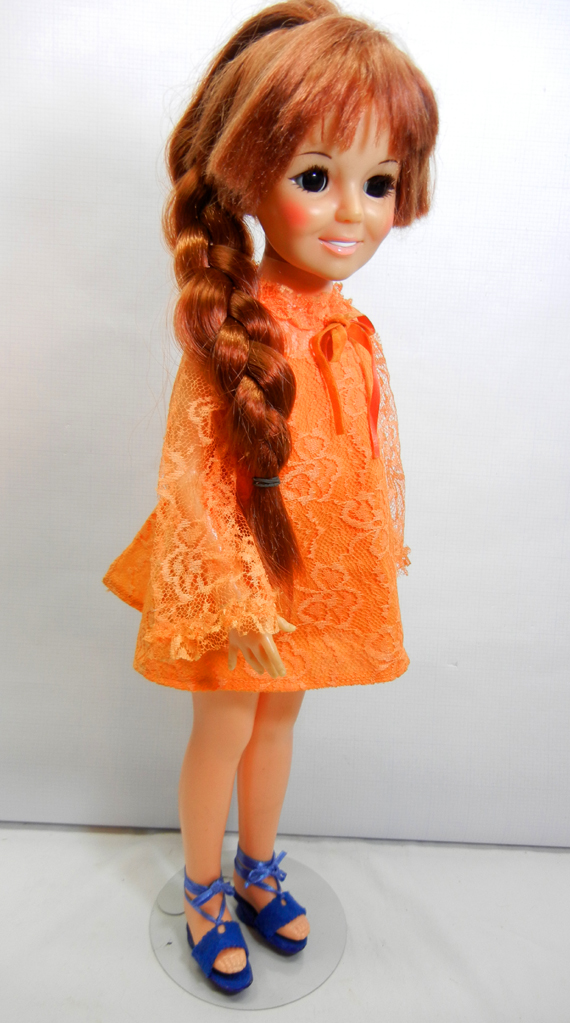 Beautiful Crissy, 18 in., 1969 by Ideal, was very popular. She had ankle-length “growing hair.” Here she is in her original orange lace mini-dress. Her Mary Jane style shoes are missing. 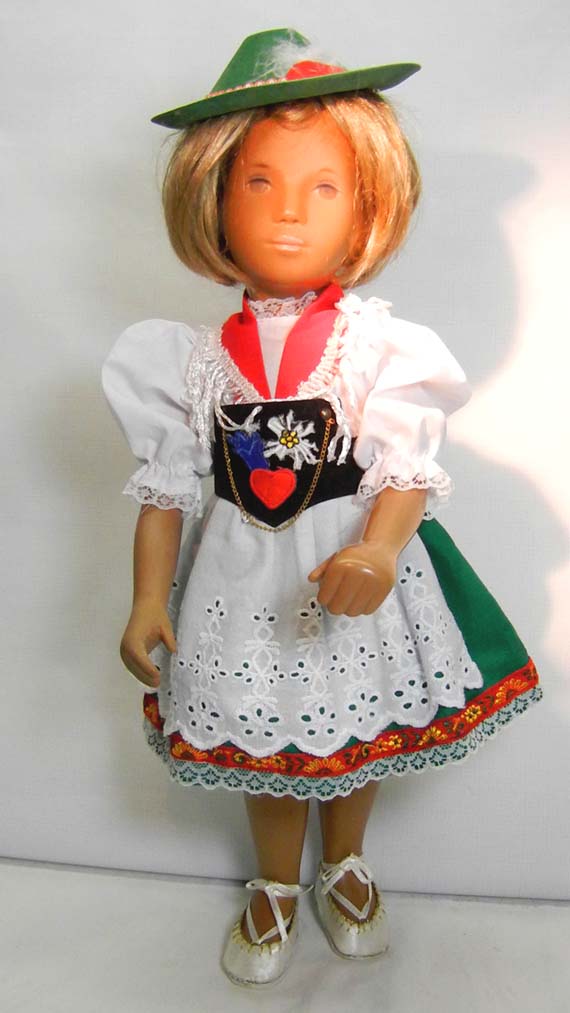 This unmarked 16 in. rigid vinyl doll is in a class by itself. Known as Sasha dolls, they were designed by Swiss artist Sasha Morgenthaler from the 1940s until her death in 1975. After first making dolls in her studio in limited numbers, mass production was started in the 1960s by Gotz in Germany and Frido (later Trendon) in England. Morgenthaler wanted the dolls to represent an image of universal childhood, so from the beginning of mass production, the vinyl was coffee-colored so the dolls would not appear to belong to any particular ethnic group. In the early 1970s, black dolls were introduced, first in an extremely dark complexion, then later in a lighter complexion. Caucasian boy dolls were known as Gregor, black girl dolls as Cora, and black boy dolls as Caleb. The one shown was found at a flea market with the hair cut off. With a blonde wig and Tyrolean outfit added, it’s now just called Sasha.

Santa’s helpers are taking a break and having fun! 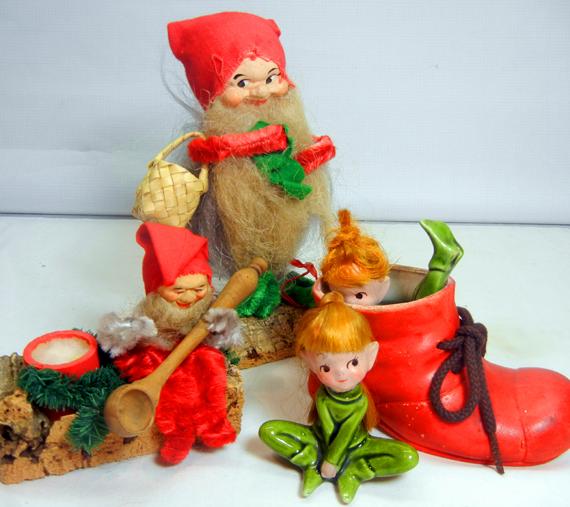 These smaller 8.5 in. Mr. and Mrs. Claus were also created by the Annalee Mobilitee Co. and have similar features. I made the elves living in the toadstool house and also the girl in the center with her sister. 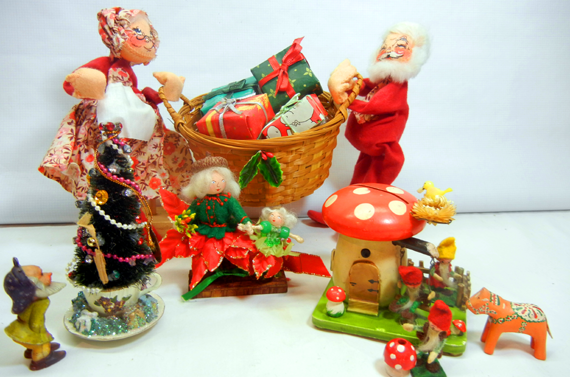 Santa and Mrs. Claus, 16 in., were created by the Annalee Mobilitee Co. Made of felt, they are wired to be fully posable and have hand painted features. They are surrounded by their helpers. The four posable elves in front are from Finland. 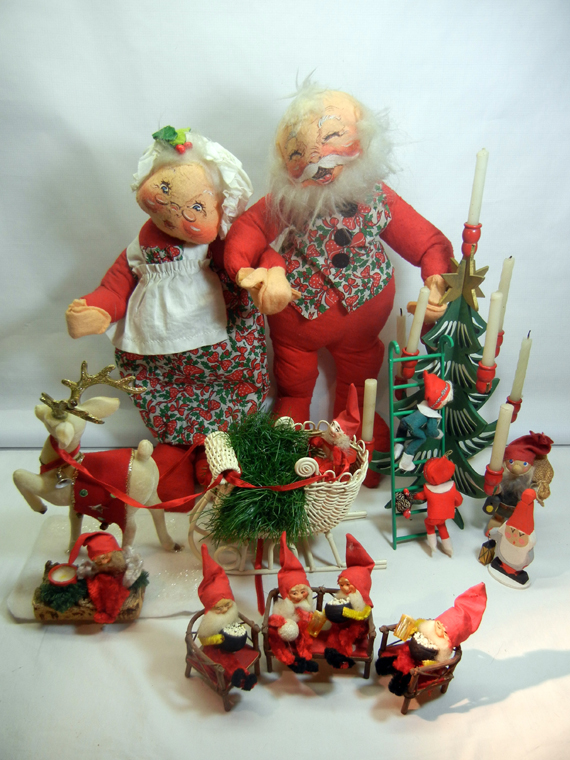 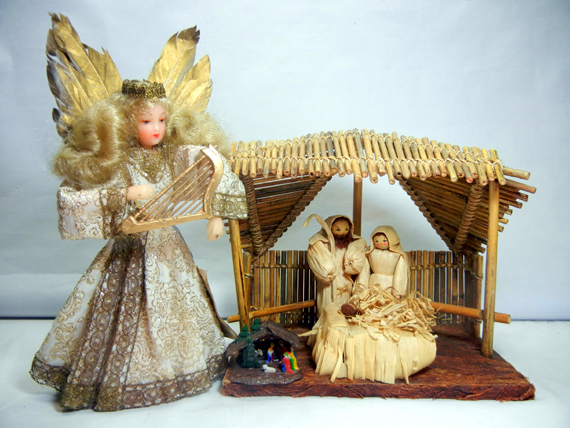 The face and hands of the traditional 10 in. German angel are made of wax. Her gown is arranged over a paper cone so that she can stand atop the Christmas tree. The manger scene was made of straw in Poland with Mary and Joseph fashioned from corn husks. You can just see the back of baby Jesus’ head. 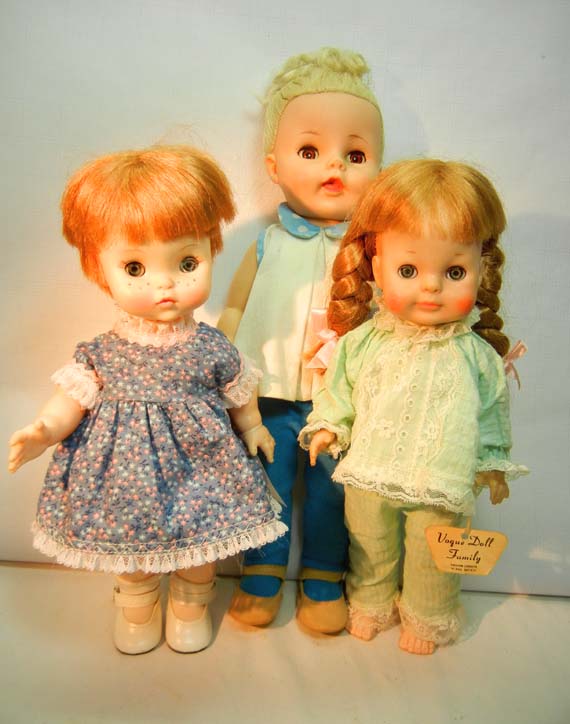 On the left is an 11 in. Toddler, 1961, made by Effanbee. using their Tiny Tubber head mold. She is all vinyl with sleep eyes and rooted hair. I made her outfit. In the center is Mme. Alexander’s 14 in. Little Mary Sunshine, 1961. The mold for this doll was first used to make Caroline, styled to resemble the young Kennedy daughter, but it was soon discontinued. Vogue’s 11 in. Littlest Angel 1964 is on the right. Her PJ’s are tagged “Vogue Dolls Made in USA.” 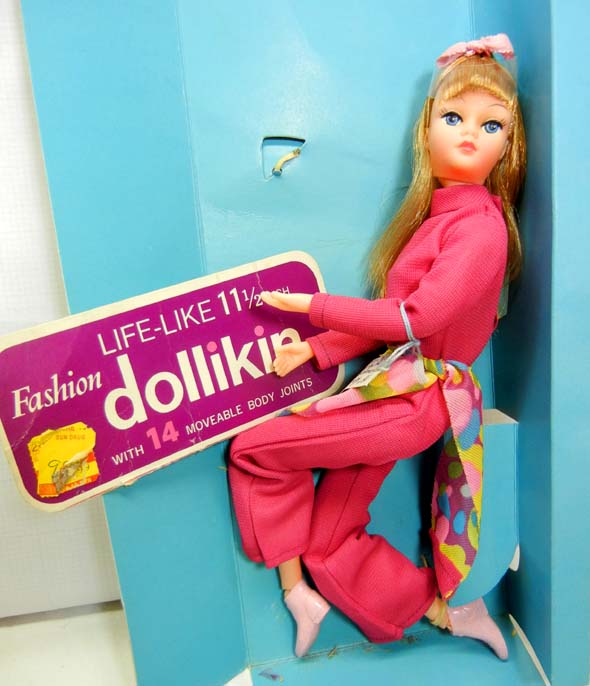 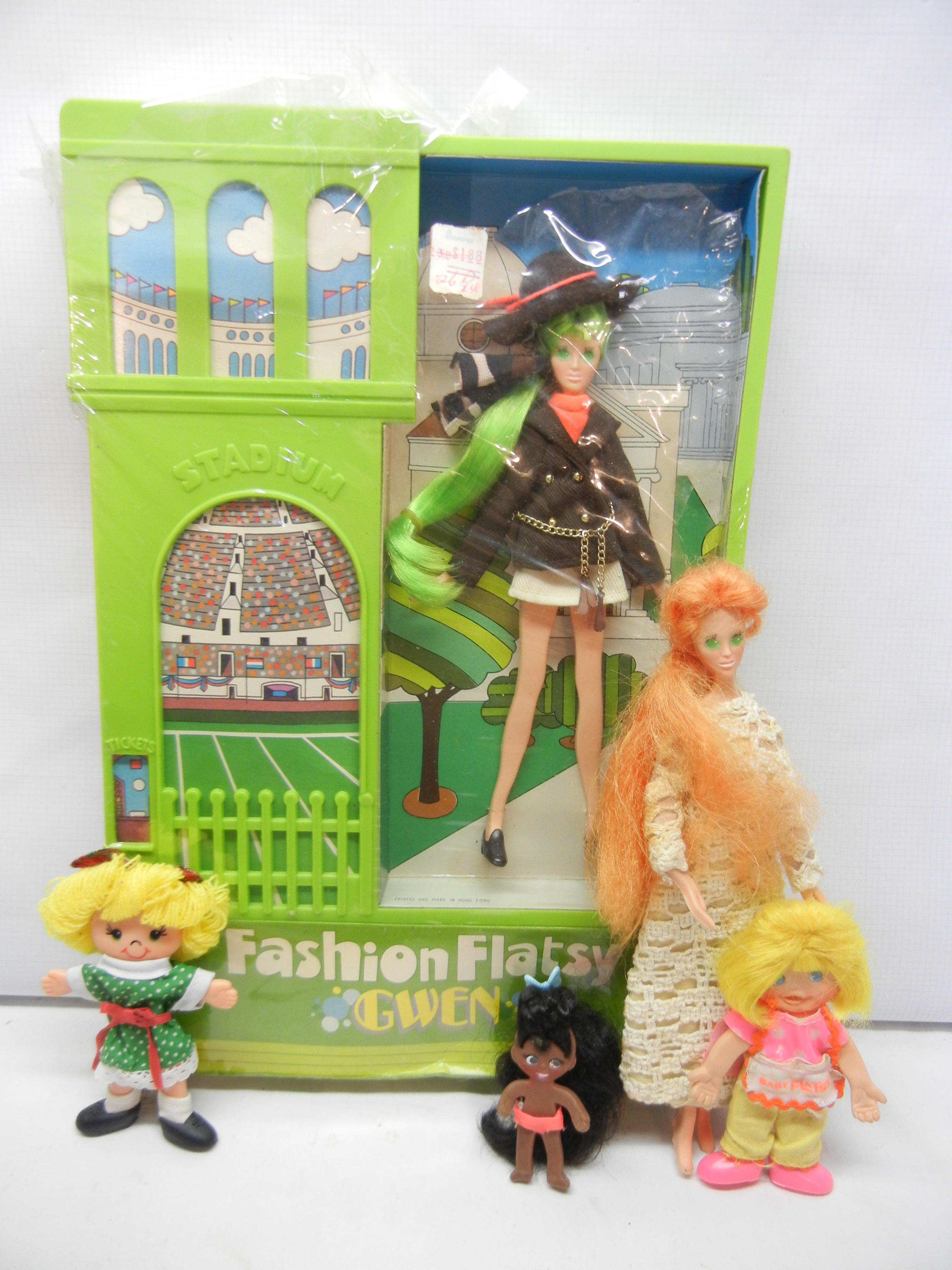 Flatsy dolls were made from 1969 to 1971 by Ideal. They were cut out in one piece from vinyl and were fully posable. In the back is 8.5 in. Fashion Flatsy Gwen packaged in a plastic picture frame with cardboard backdrop. Another 8.5 in. Fashion Flatsy Ali stands on the right. Baby Flatsy, 4.5 in., Mini Flatsy, 2.5 in., and a 1982 new Flatsy by Gatabox stand in a row. 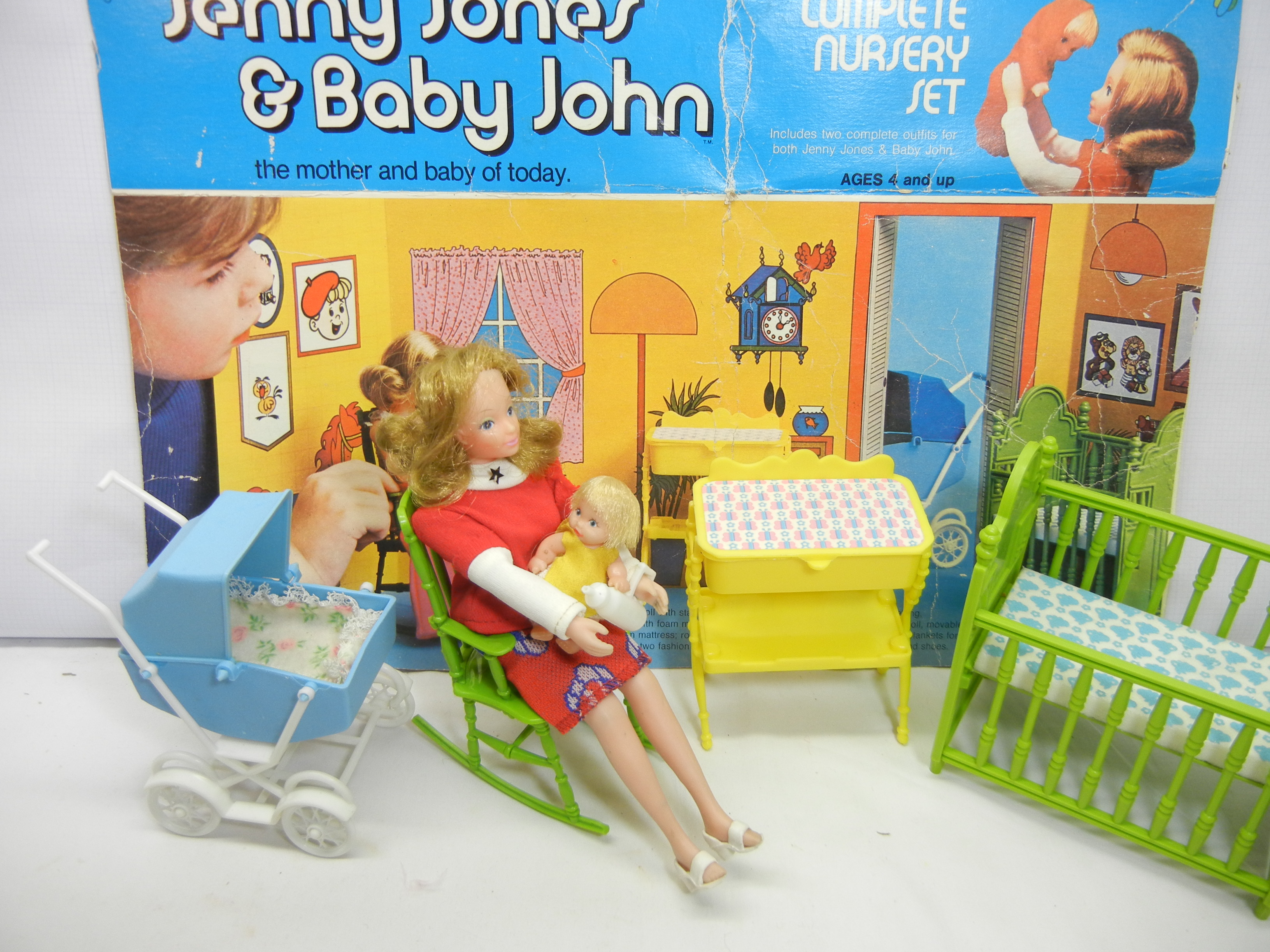