This is a 15 in. Vietnam souvenir doll, plastic and vinyl, many of which were sent home by US soldiers in the 1960’s. She is wearing an áo dài, a traditional Vietnamese national costume. It is a tight-fitting silk tunic slit to the waist on both sides and worn over pantaloons. She is wearing a simple gold necklace. Her hat is a replacement., much like the original. 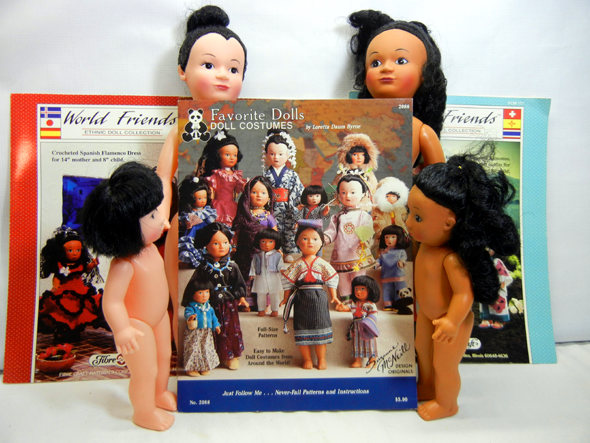 This 1989 booklet for World Friends by Loretta Daum Byrne contains the patterns and history of seven different national outfits. 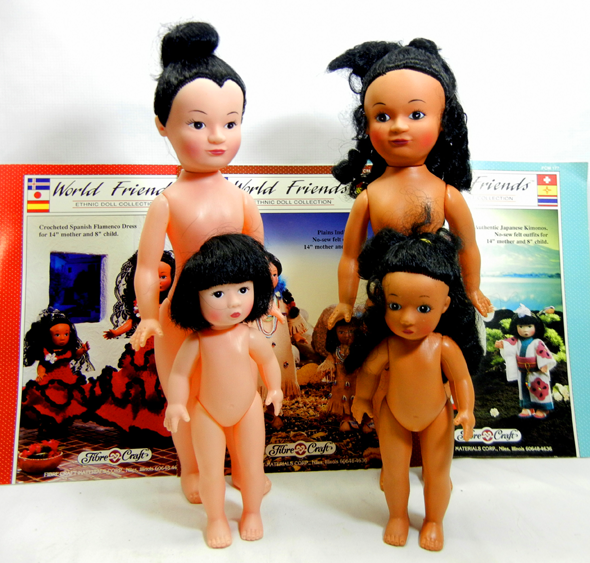 World Friends, 1989, is a series of mother and daughter dolls to dress in their national outfits. They were designed by Loretta Daum Byrne along with patterns and instructions for crocheted or no-sew felt costumes.

This was a mystery doll until earlier this year when I found photos of an identical one published by the Rockefeller Folk Art Center in Williamsburg, VA. Their book Dollhouses Miniature Kitchens, and Shops (1996) contains three photos of the 15 in. cotton stuffed doll with an embroidered face. It was described as being made in Brazil, possibly as late as 1930. A very odd feature was the applied celluloid fingernails on each hand. Not knowing her identity, I made the mistake of removing the nails because they were so “creepy.” 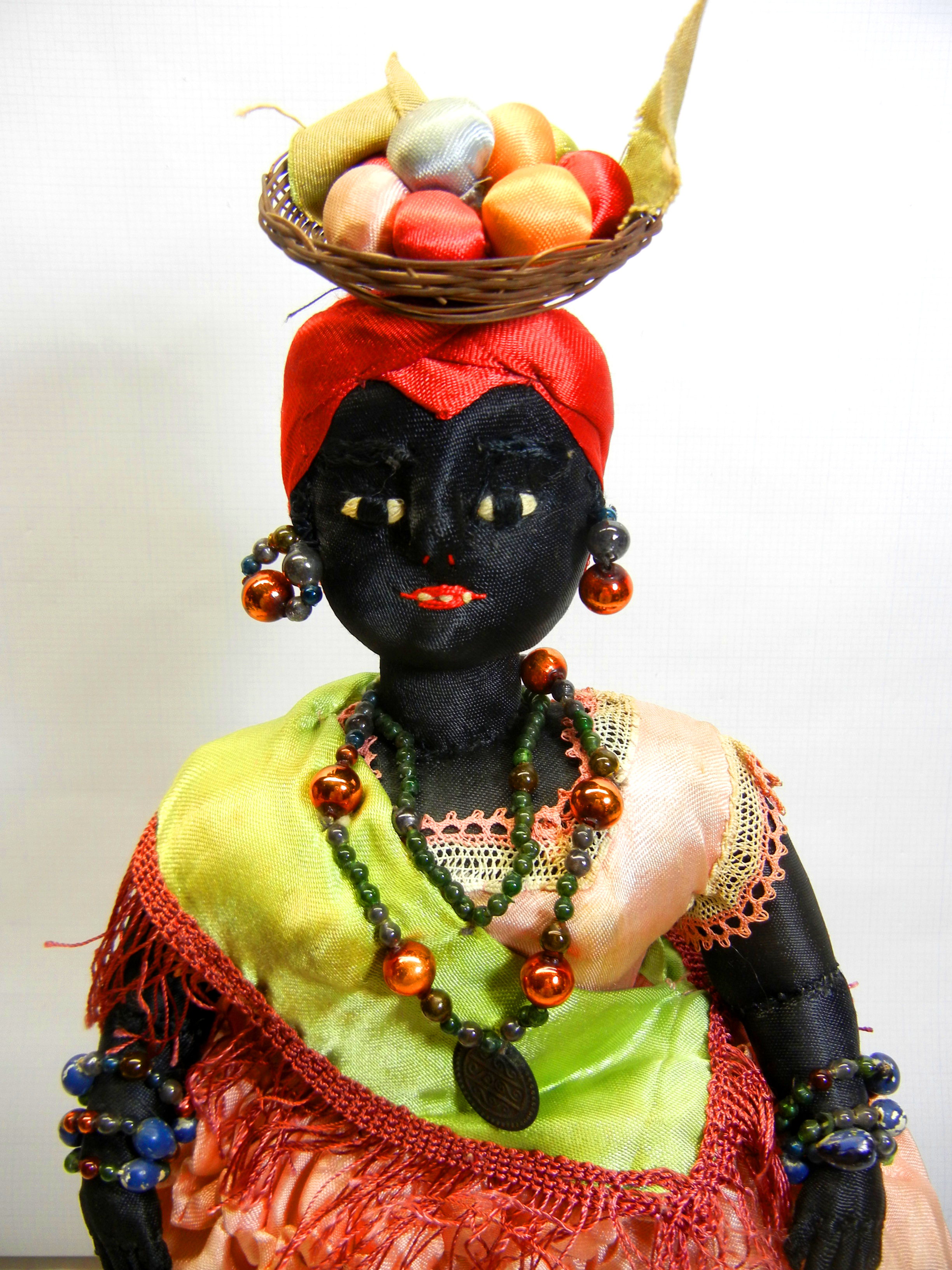 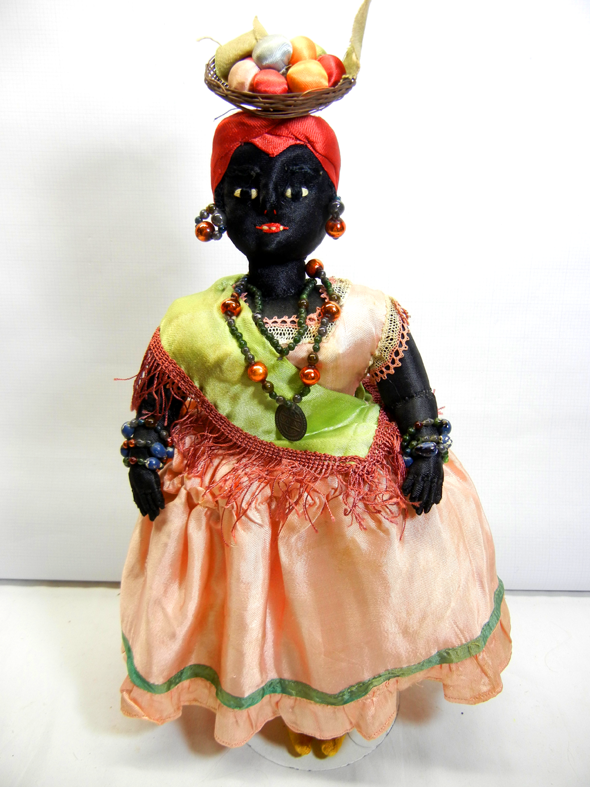 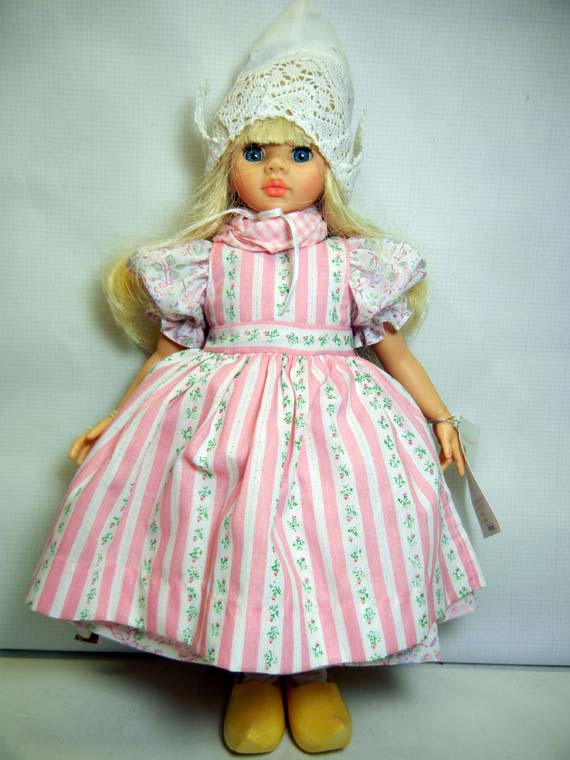 I can always recognize a doll by Pauline. It is so appealing in every way. This one portraying Holland is 14 in. with open glass eyes, vinyl head and limbs, and a stuffed cloth body. It was designed by Pauline Bjonness Jacobsen, Tiki Crafts Industries, 1993. 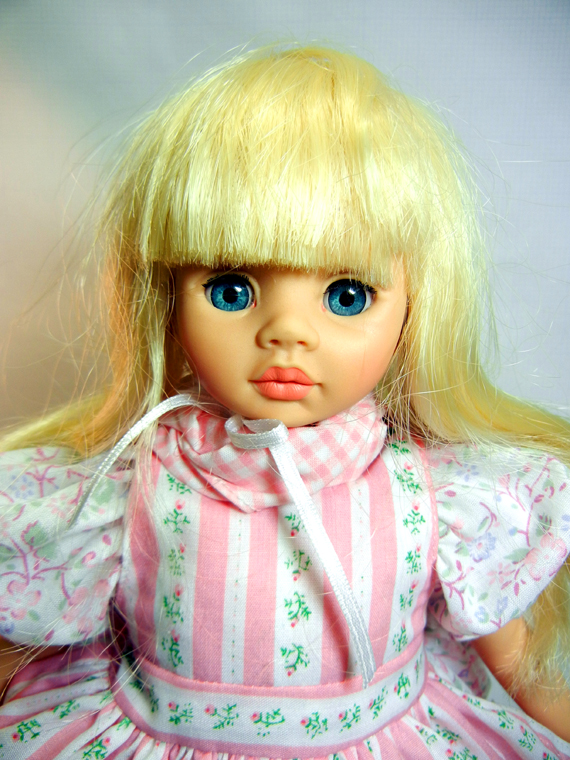 This pair of 8.5 in. vinyl dolls representing Switzerland are a 1986 Limited Ed. by designer Suzanne Gibson. Made for play, their clothing is quite detailed. The boy’s pants are called lederhosen; there are bows on his socks and flowers on his hat. The girl in regional dress wears touches of black lace on her bonnet and arms. 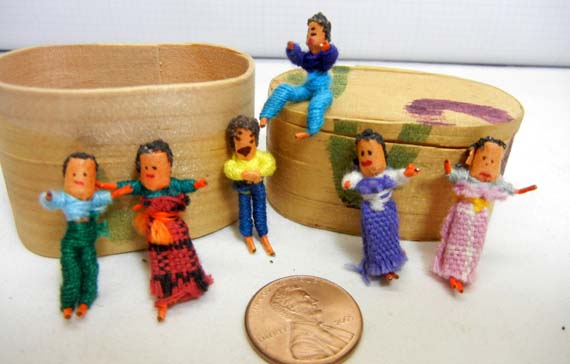 These six 1 in. Trouble Dolls from Guatemala in their original box are from Parkville Imports Inc., 1981. The native Indians tell this story about the dolls. When you have troubles, share them with your dolls. Remove one doll for each problem and tell them about it. Do this before you sleep and the doll will try to solve it while you sleep. No more than six problems a day or you’ll run out of dolls! 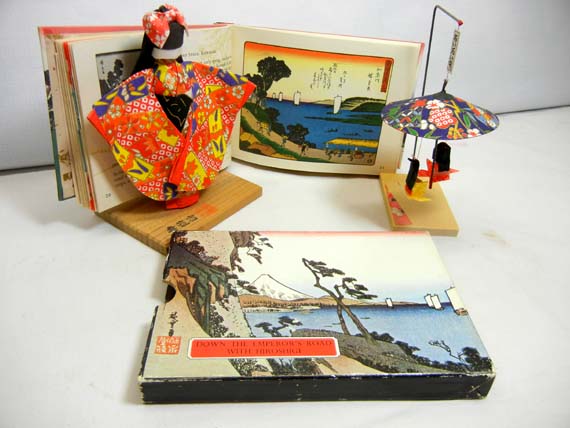 These dolls are made of paper. Origami was used to make the head of the larger one. The tiny dolls whirl around under their umbrella in the slightest breeze. In front is a book of brilliant wood block prints by Hiroshige titled, “53 Stages of the Tokaido” (The Emperor’s Road). It depicts landscapes and activities of travelers along the road from Edo (Tokyo) to Kyoto in the 1830’s. The artist produced many prints but his public always demanded new versions of the Tokaido so he eventually produced 20 sets. 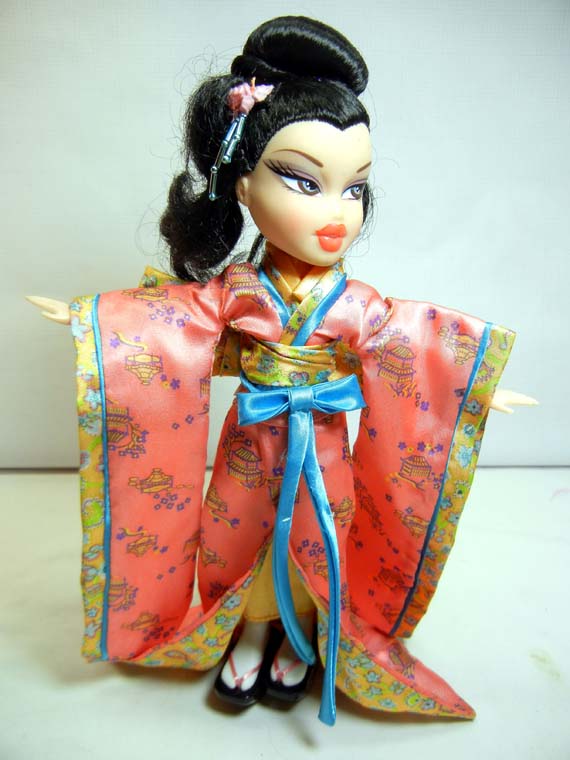 MGA, the maker of the currently popular 9 in. Bratz doll, also made an impressive Japanese Bratz version in 2001. Her foot and shoe snap onto her ankle, so the thong platforms called “geta” stay put and also act as a stand. 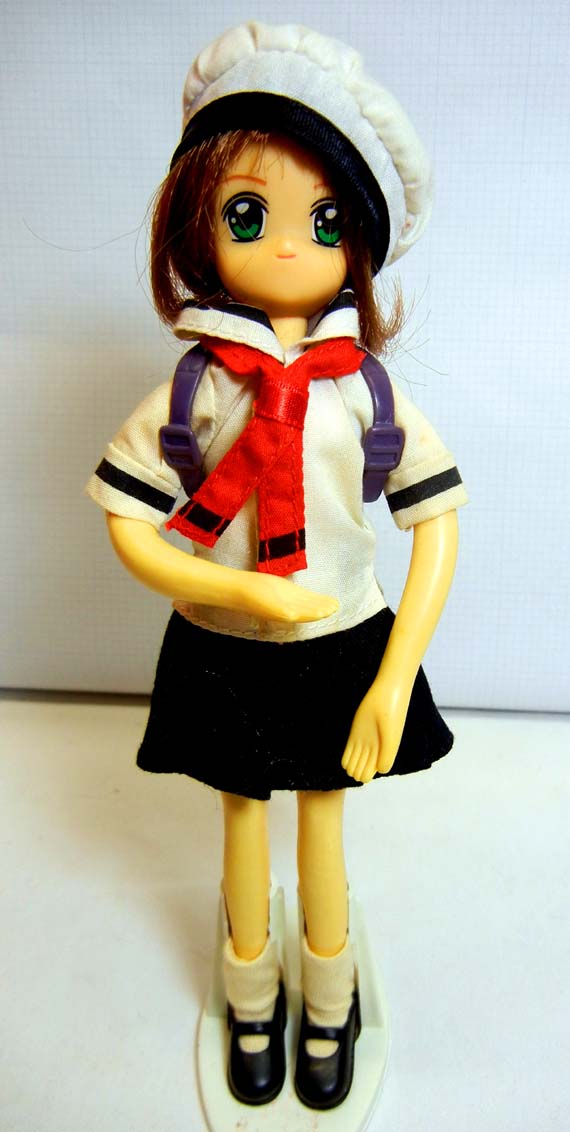 Sailor Moon, 8 in., is based on a Japanese manga style series about a teenage school heroine. On her back and clothing tag, she is marked “CLAMP et al Trendmasters 2000 China.”  This is a play doll made of very pliable vinyl. Under her hat two small pigtails are tied with red beads. Her tiny mouth is just a small cut under her nose. She wears a backpack.