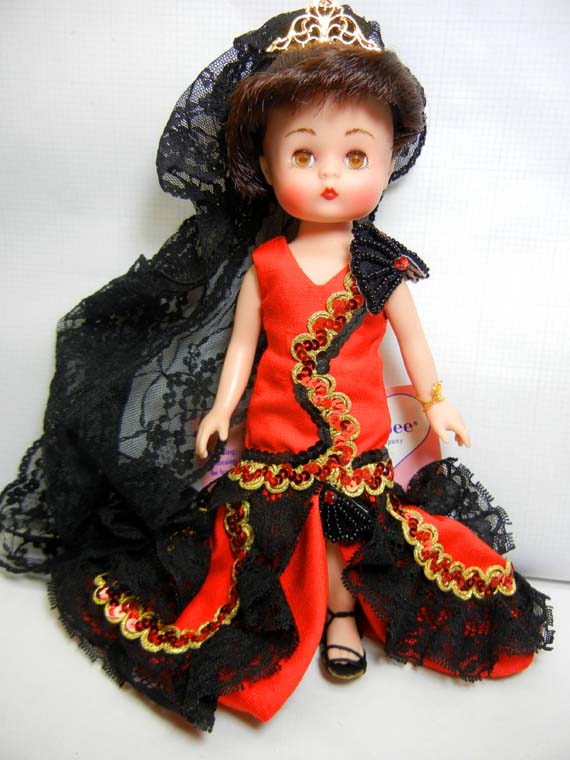 Effanbee, a doll maker since 1910, made an International Series in 1994, using their 8.5 in. L’il Innocence doll. It has a sweet face with sleep eyes, is fully jointed, and represents Spain. 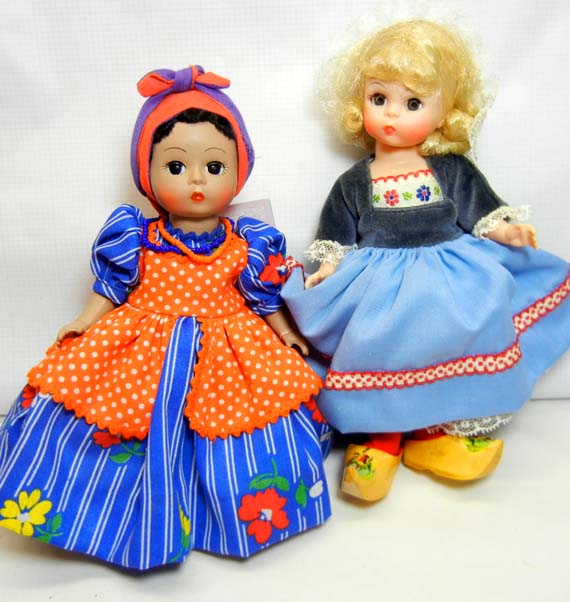 These 12 in. vinyl M. I. Hummel dolls were made by Goebel in Germany, 1960-1972. My daughter found them second hand without shoes and socks. The girl, Little Shopper, is missing her original basket and apron. Sister Maria Innocentia Hummel was a Franciscan Nun, born 1909 in Bavaria. She had artistic talent and attended Munich Academy of Art. Franz Goebel made an agreement to manufacture figurines adapted from her drawings of happy children. She died in 1946 but the figurines continued to be made followed by dolls in 1949. 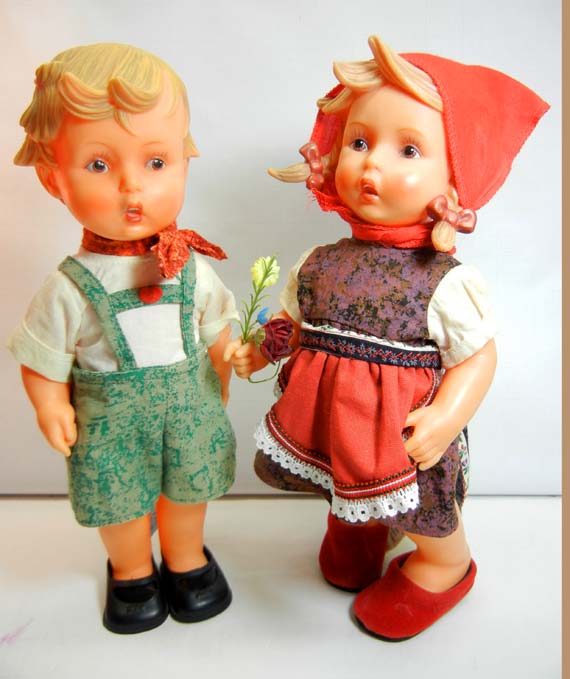 This unmarked Lenci-type European couple, 9 and 8 in., with side glancing eyes is unmarked. They are hand-made of felt and have a wired body structure. Lenci dolls were expensive, life-like works of art. This couple is as close as I will get to collecting one. 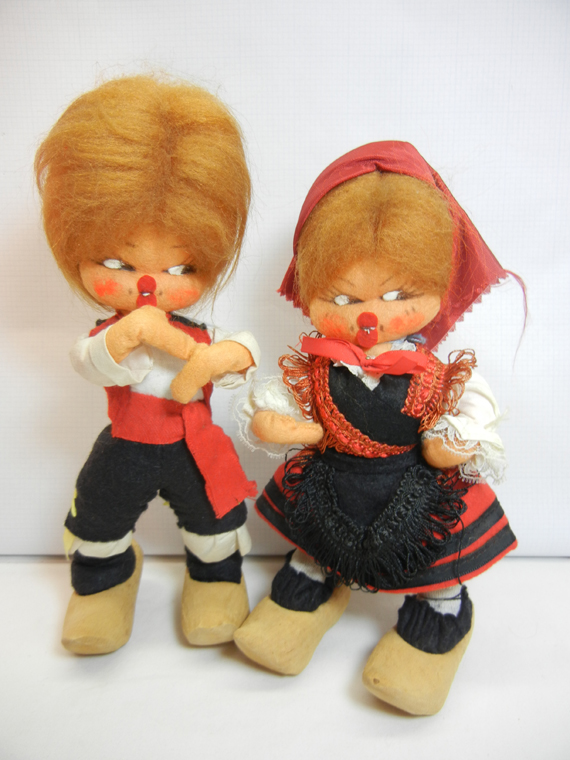 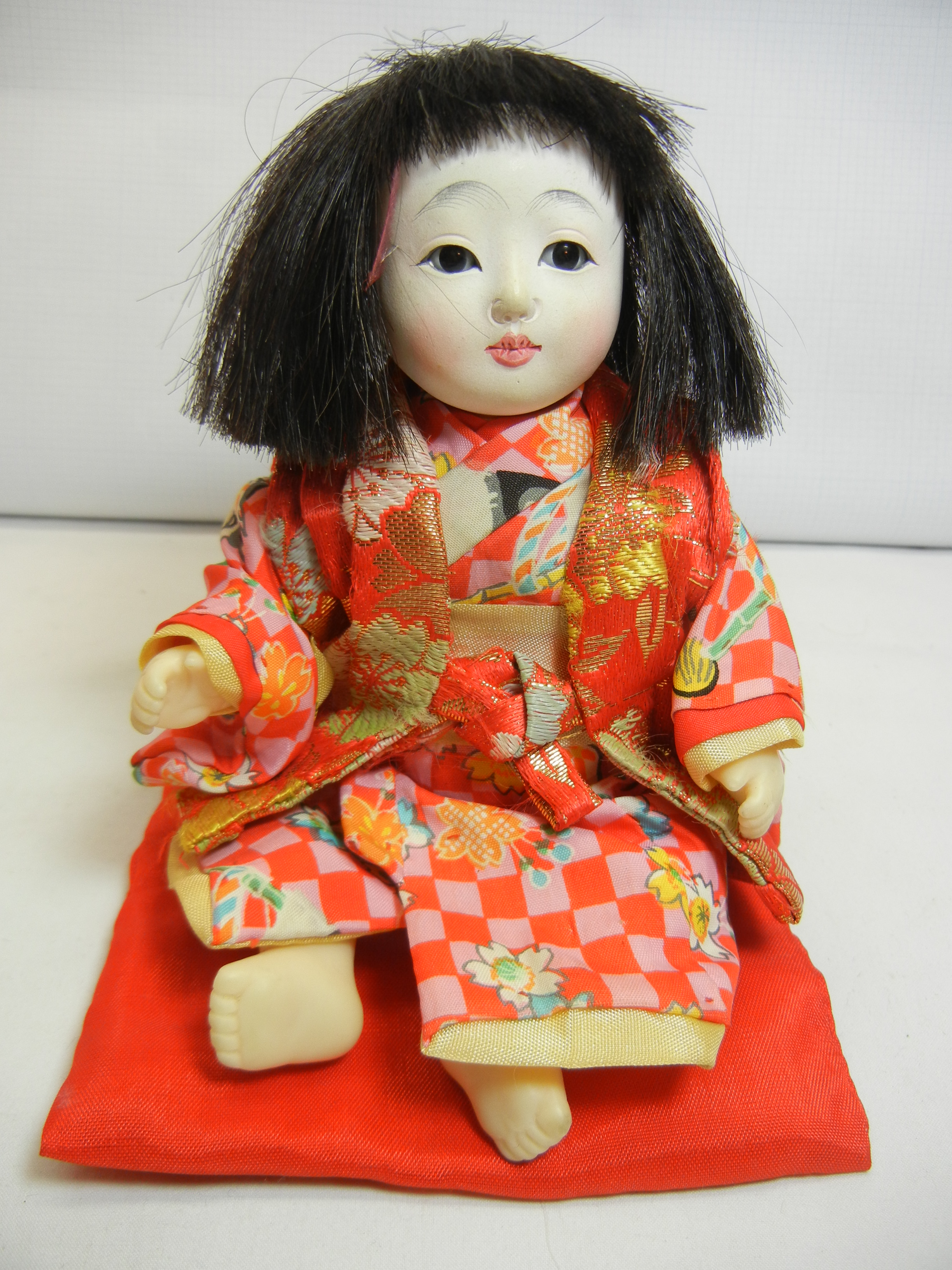 I found this 8 in. doll from Japan in Woolworth’s during the 1950’s. The doll is jointed vinyl. The face with glass inset eyes has a smooth coating containing powdered eggshells. I was astonished to find it in the five and dime and at a bargain price. 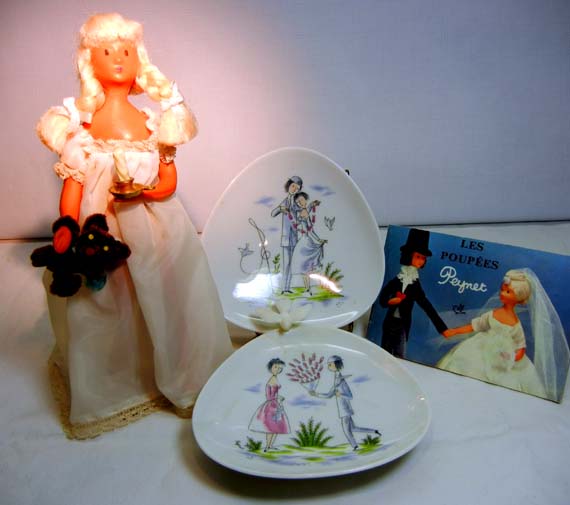 French artist Raymond Peynet made simple line drawings of young Parisian lovers in post-war France. His art work was very popular and this fashion doll was based on it. Technigom in Paris made the 8 in. bendable latex foam doll from 1962 to 1968, following Pegnet’s designs. The subjects ranged from Romeo and Juliet to Brigitte. Bardot. Here is Bonne Nuit with booklet and two small dishes with his drawings. 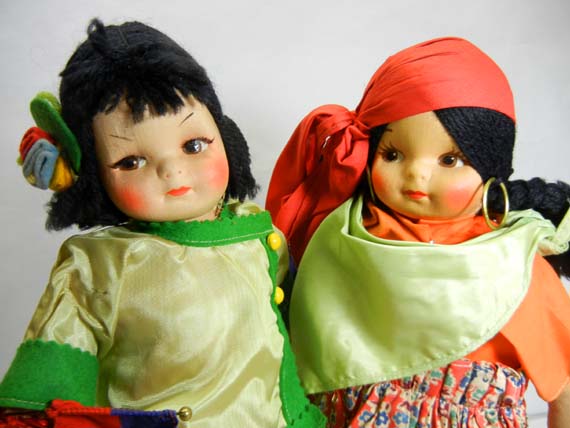 These 13 in. cloth dolls by Georgine Averill have been in my collections since the 1940’s. They carry little silk flags of their countries, China and Romania. Georgine dolls have kept their bright colorful faces and outfits for decades. 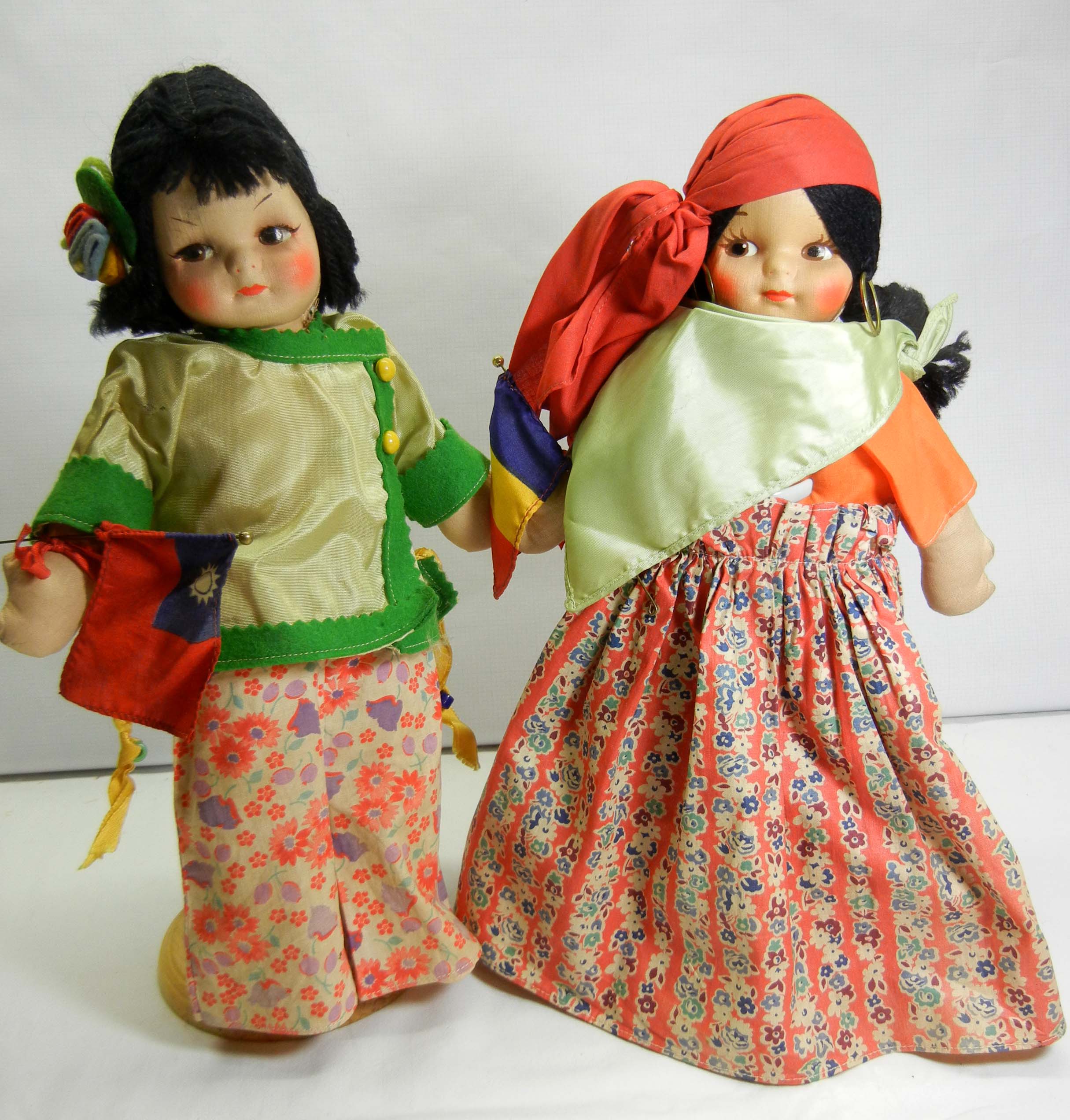 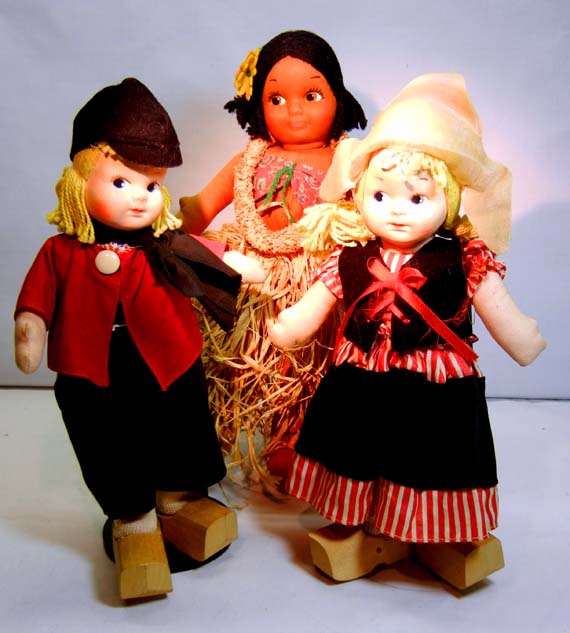 By the look of their molded mask faces and cloth body construction, I suspect this 13 in. Dutch couple is the work of Georgine Averill. Her dolls were very popular in the 1940’s when they were given to me, along with the Hawaiian doll of similar construction in back.

There was year when our family of six got involved with a certain “character.” The word “doll” is not quite appropriate. He was a 15 in. white-bearded elf named Stroodle that I made from a pattern by Rainie Crawford. 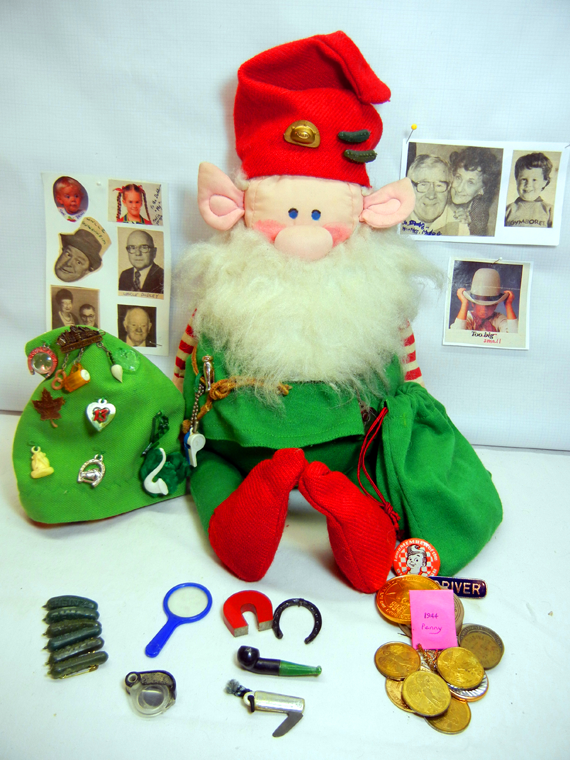 When our oldest son left home and the USA as an exchange student, his brothers wanted to keep in touch. They created tape cassettes of a make believe morning radio show, “Breakfast with Stroodle.” Our middle son had the role of the obnoxious announcer while our youngest son created the inimitable voice of Stroodle himself. A funny and improbable solution to everyday problems was the premise of the show. Stroodle would describe one of these complaints with the words, “don’t you just hate it when ….” followed by “well, have I got a surprise for you ‘’ followed by a long-winded ridiculous solution. Occasionally I played the part of the excitable, disoriented Mrs. Mudge. Daughter Elaine would break into the show with insulting remarks like, “He’s not a radio host, he’s a stuffed animal!”  The character played by their Dad was always looking for a reason why he might “in a minute” remove his belt and administer a sound spanking. There were no more shows recorded after our oldest son returned home but we never forgot the fun we had.

Some of the items surrounding Stroodle are his St. Pat’s hat, gold coins, assorted tools, and photos of fans and relatives. His collection of eight Heinz pickle pins is impressive, even for a Pittsburgher! 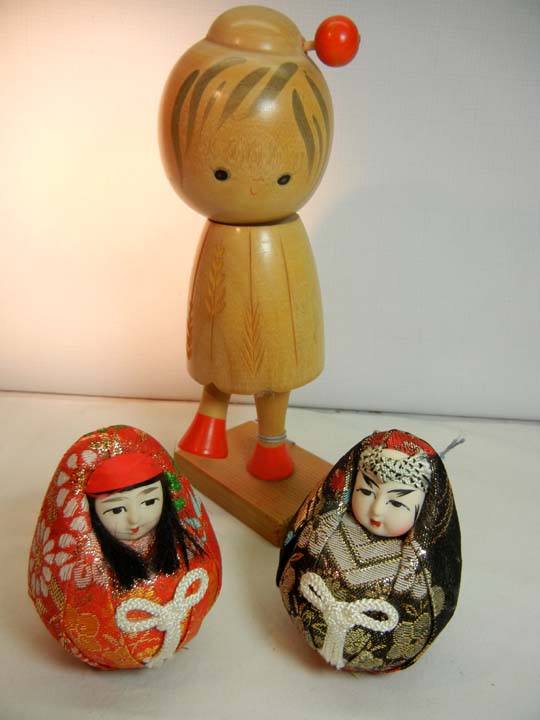 The 3.5 in. dolls with roly-poly bodies and plastic faces are Daruma dolls from Japan. Rather than wooden bodies, theirs are lightweight plastic balls covered with brocade fabric. The large 7.5 in. wooden doll from Japan does not have a nodding head but one that turns on an inserted dowel.