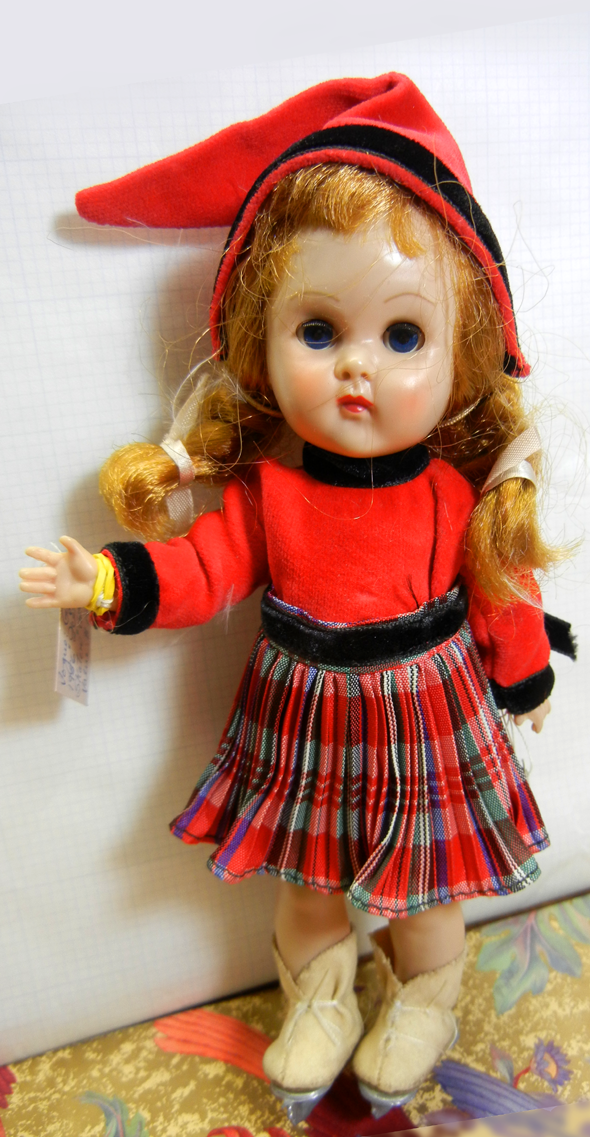 The Ginny dolls of Jennie Graves continued to be popular from the 1940’s into the 1950’s when hard plastic and later vinyl was preferred. This was the first hard plastic Ginny I got and it was a walker. They seemed to become cute and cuter over the years. 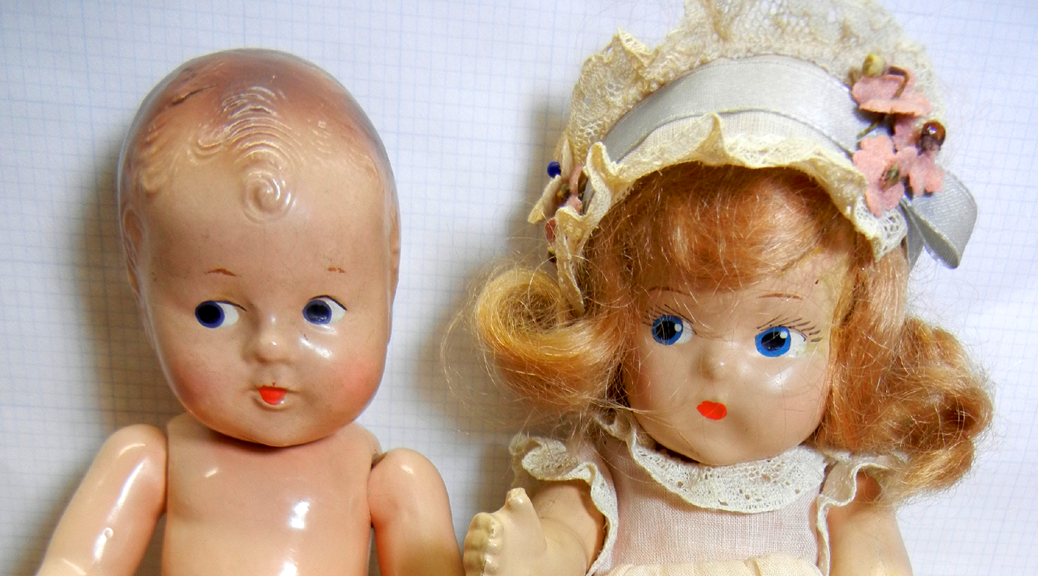 These two 7.5 in. Ginny dolls are exactly the same, except one has painted hair and the other a mohair wig. Both are composition dolls with painted side-glancing eyes and identical faces. The undressed one is marked R. & B. Doll Co. while the other Bo Peep, is marked Vogue on her back. Jennie Graves started the Vogue Doll Co. in the 1930’s and commissioned sculptor Bernard Lipfert to design this doll. Jennie Graves was the dolls’ dress maker. The undressed doll sculpted by Bernard Lippert was also used by the Alexander Doll Co. for their 1930’s Dionne Quintuplets dolls. 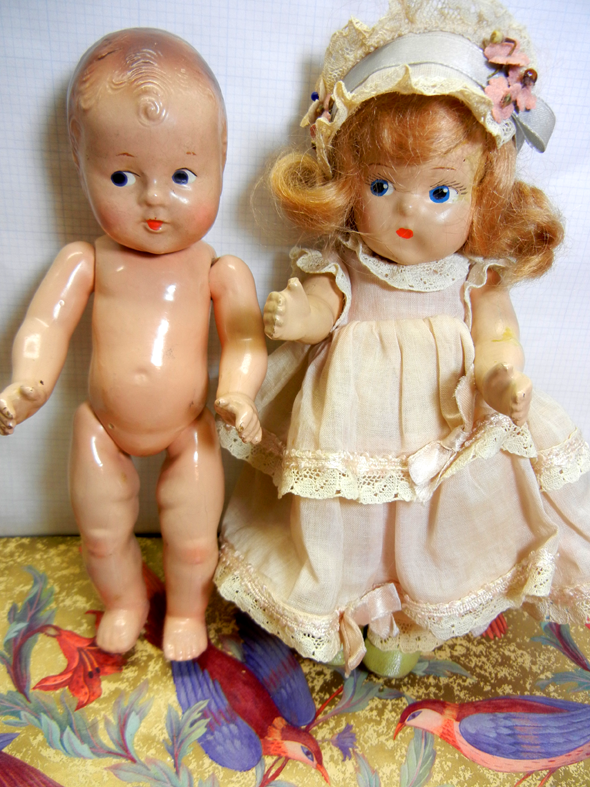 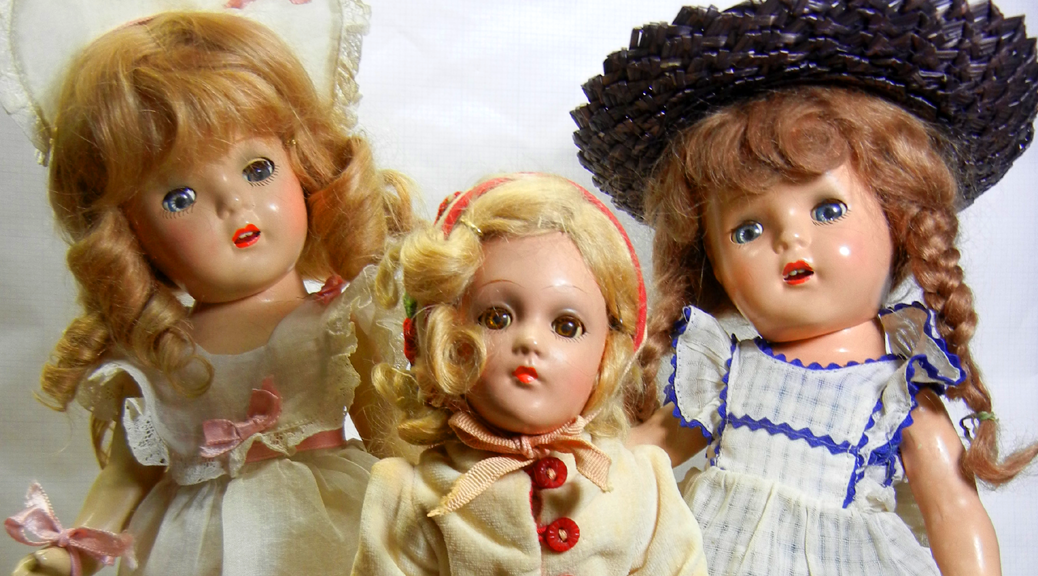 Here are three unmarked 1940’s composition dolls that were given to me. The 13 in. doll on the right is wearing one of the popular pinafore dresses and has mohair braids and straw hat. The 13 in. doll on the left carries a bag with laced-edged hanky, mirror, powder box, and powder puff marked Vogue.  The 11 in. doll in the center with sleep eyes is, dressed as a skater, resembling the famous Olympian and film star, Sonja Heine. Can anyone identify these three? 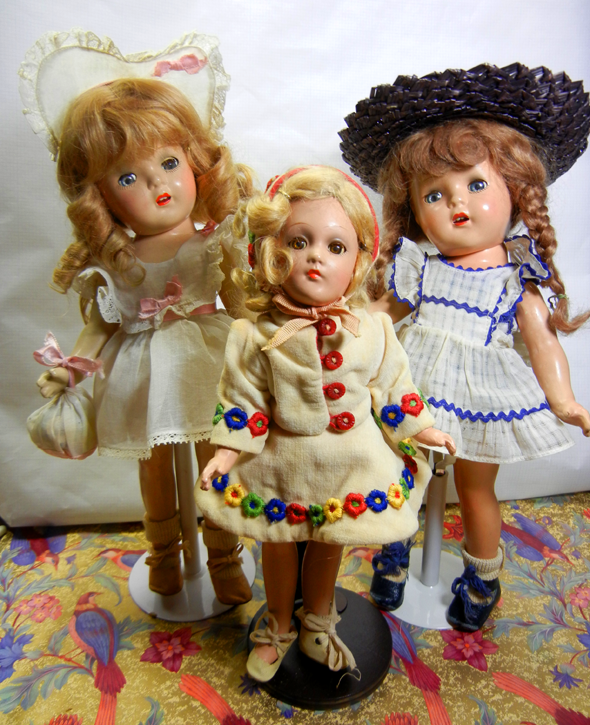 This is what was left of my Blue Willow doll’s tea set after an unfortunate accident. It was around 1942 and my friend Patsy and I were going to have a doll’s tea party. It is marked, TRANSON WARE JAPAN. At that time I wore a silver ID tag around my neck because it was wartime and we lived in Washington, DC. 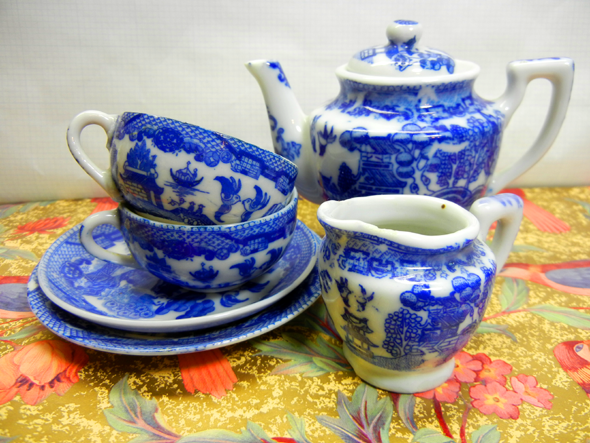 When mother bought me a Madame Alexander Little Genius cloth and composition baby doll I had a feeling that, at age 12, I was getting too old to play with dolls. So she was never played with and remains in perfect shape. 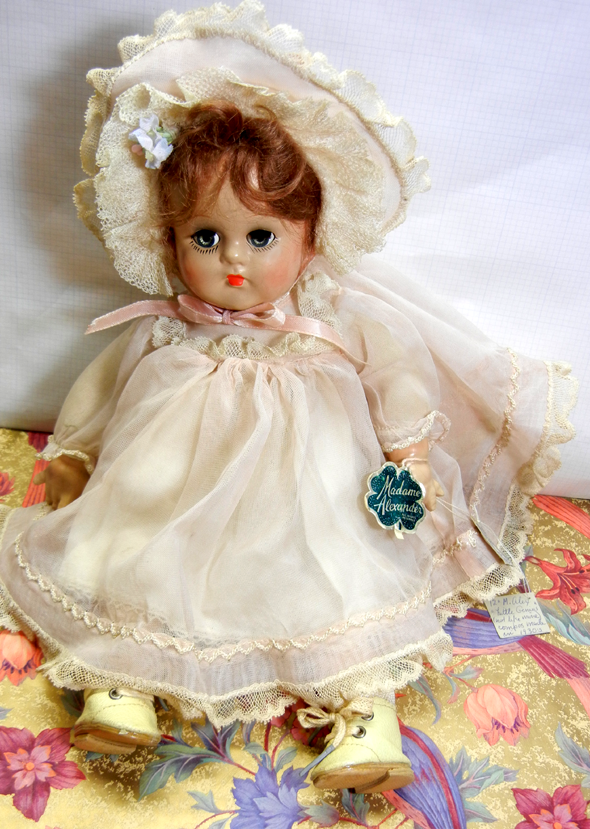 My Dad made me a Craftsman style cabinet for the doll collection. He had already made a long drawer to fit under my doll crib, needed for supplies when I gave Magic Skin Baby a bath. Although the bodies of the first 1940’s Magic Skin dolls were of natural rubber, with the advent of WWII restrictions they turned to synthetic rubber. This was a thin skin of rubber stuffed with cotton or other materials to provide a soft-to-the-touch life-like feel. But with time, the pinkish skin color darkened or mottled, as it did with mine. The heads were usually hard plastic or composition. The body of my Magic Skin Baby was much like this one. 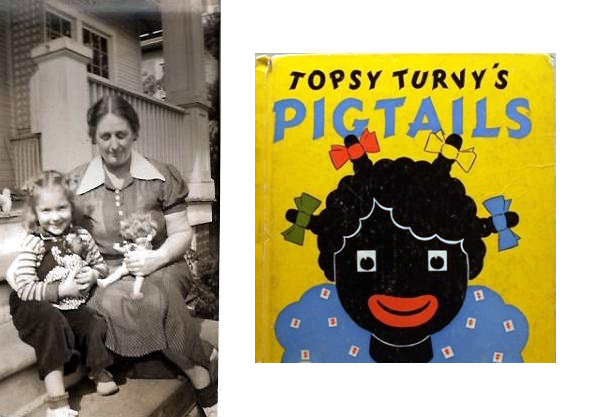 My mother with my Shirley doll and me with my Topsy-Turvy doll . This was a double-ended cloth folk doll featuring a white girl and a black girl joined at the hips that I really loved but I no longer have her. One of my favorite early books was Topsy-Turvy’s Pigtails which I still have. 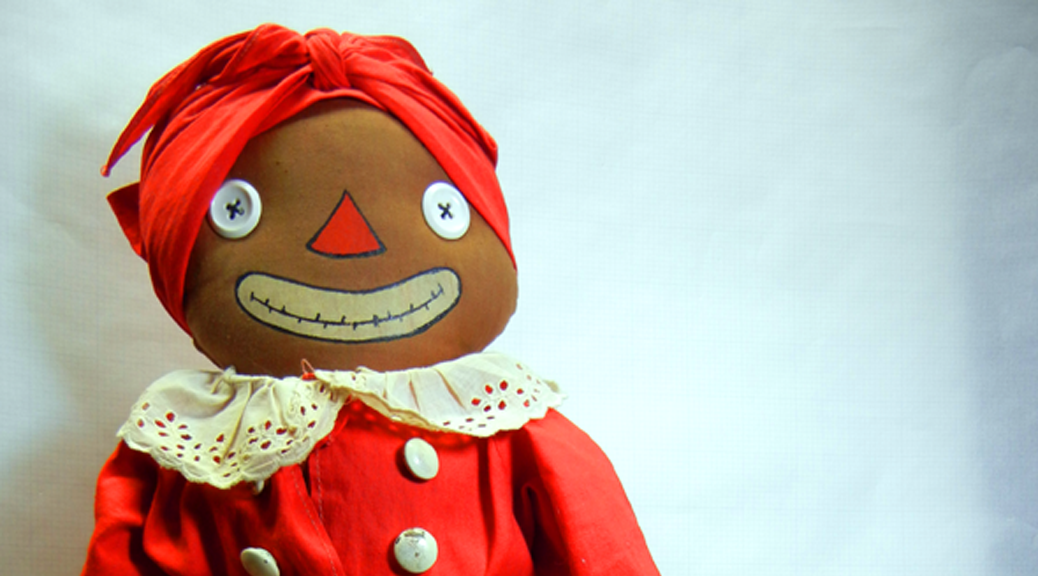 Near the end of World War II, I received another doll from the Raggedy book series called Beloved Belindy.  I enjoyed reading the monthly magazines Children’s Playmate and Child Life, as well books about children from foreign lands.  There was a feeling of relief and celebration with the end of the war and my brother coming home. 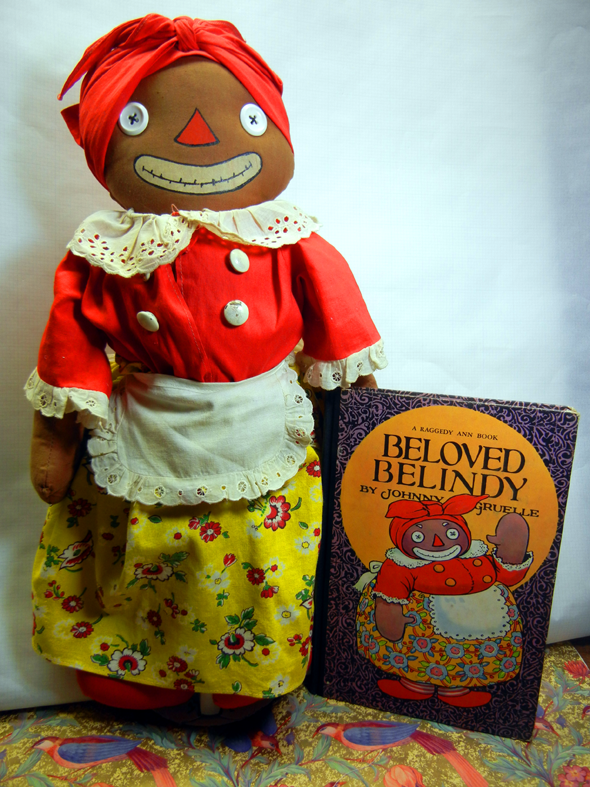 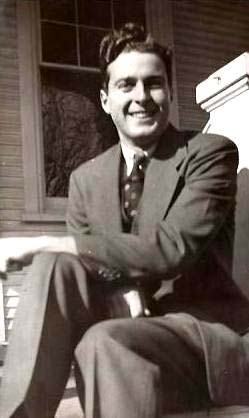 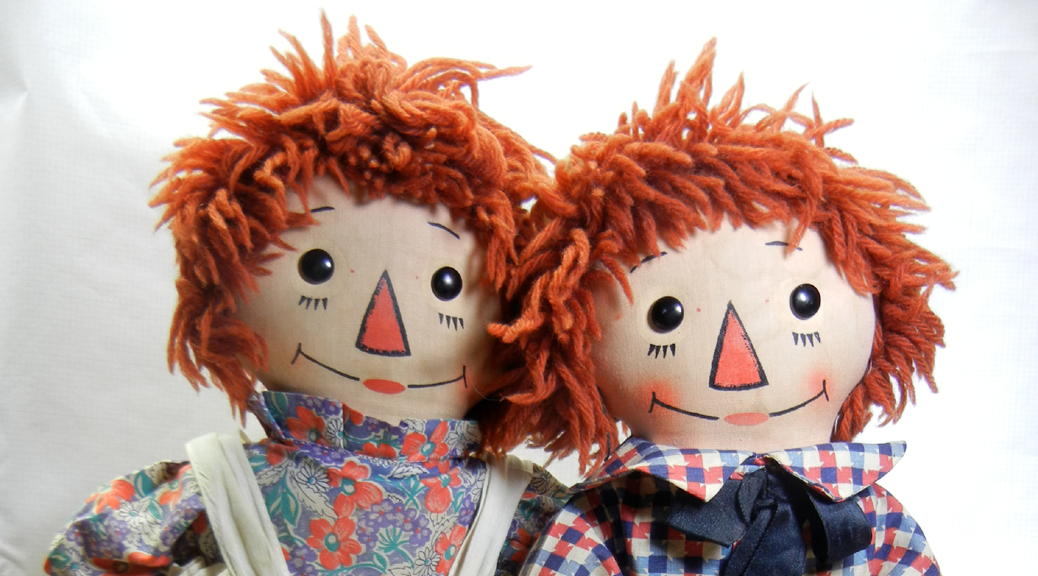 At Christmas circa 1943 I received Raggedy Ann and Andy dolls  as well as books about their adventures. These were 19 in. cloth dolls and their clothes were held together in the back by small safety pins. These dolls were made at that time mainly by Georgene but there is no identification. Mine are in near mint condition. 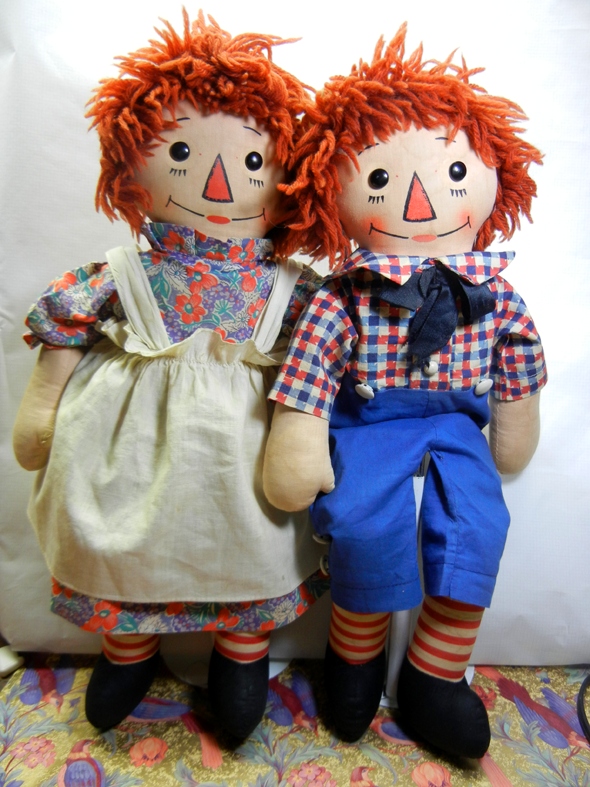 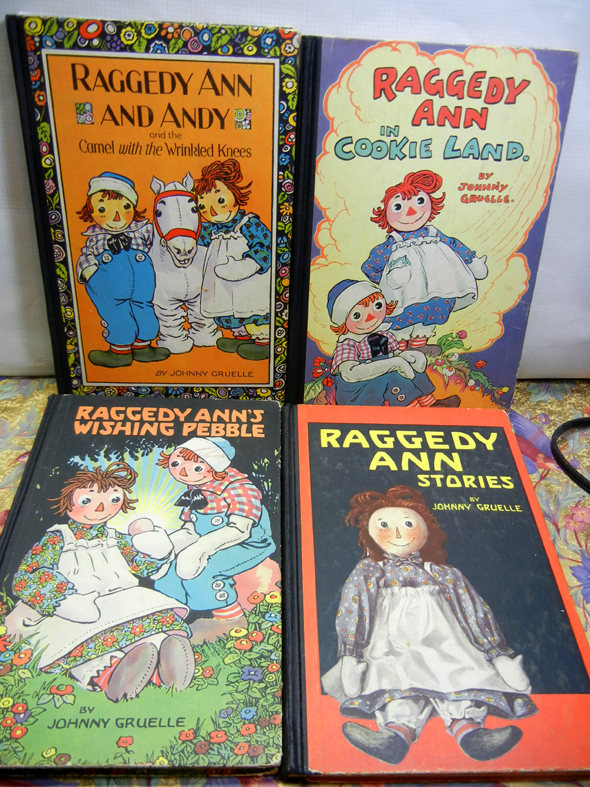 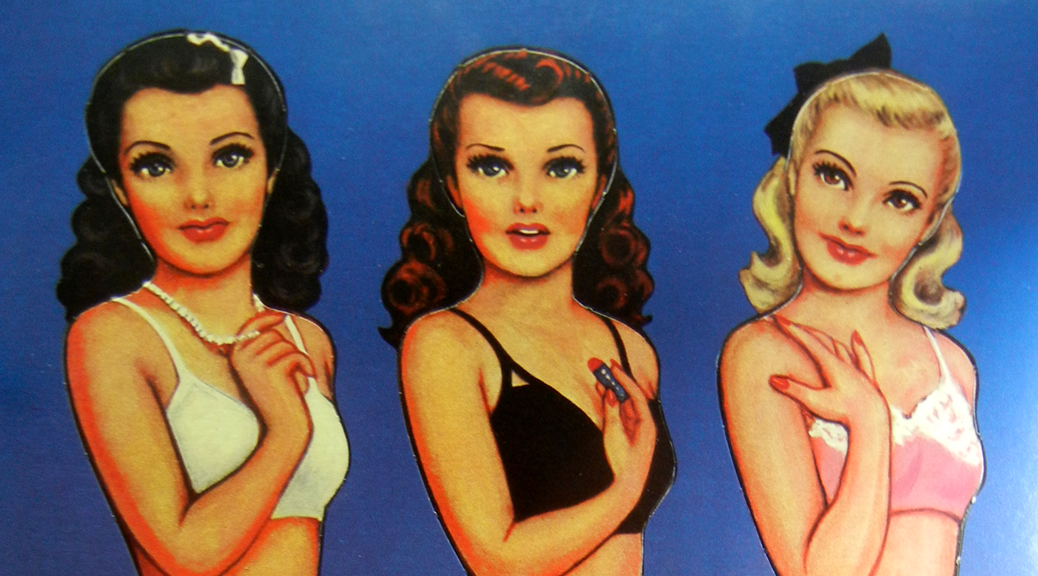 During WWII girls my age played with dolls and visited each other’s houses when we could walk there. Use of a car was restricted because

gasoline and tires were severely rationed.

My friend Jean’s family took in a friendly easy-going cat. When it came to choosing a name for him there was a bit of a controversy, then a compromise. They were going to call him Tom but the name finally chosen was Thomas J. Jefferson Spot Watkins-Suddath Cat. I won’t bore you with the reasoning.

Patsy was another friend, shown here with my sister when we were infants.   Remarkably, when she accidentally broke all but 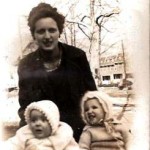 two pieces of my Blue Willow tea set, we remained friends. Her family had a gold star in the window, indicating that a family member had been killed in the war.

My friend Kitty and I cut out and played with military and movie star paper dolls, easily found at the five-and-ten cent store.  For clothing we all liked wearing red, white, and blue. 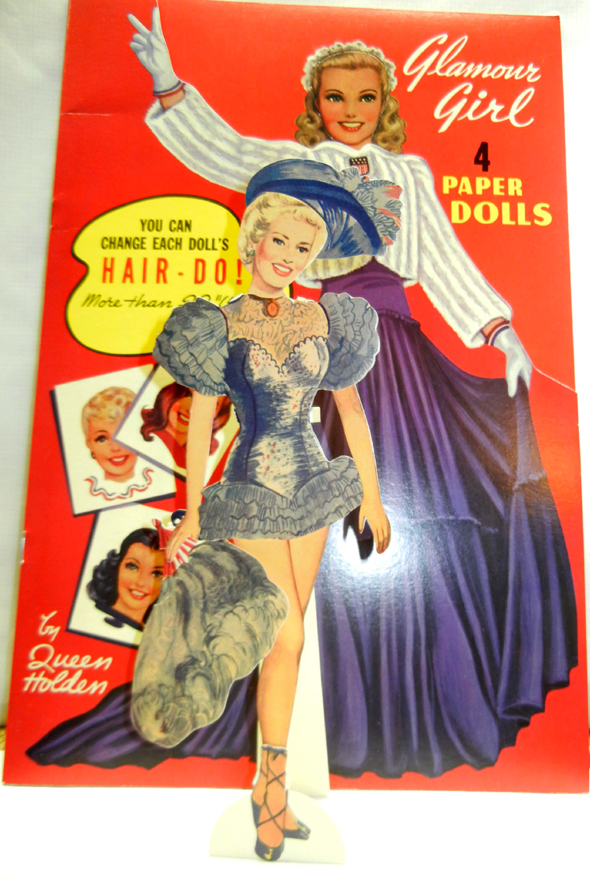 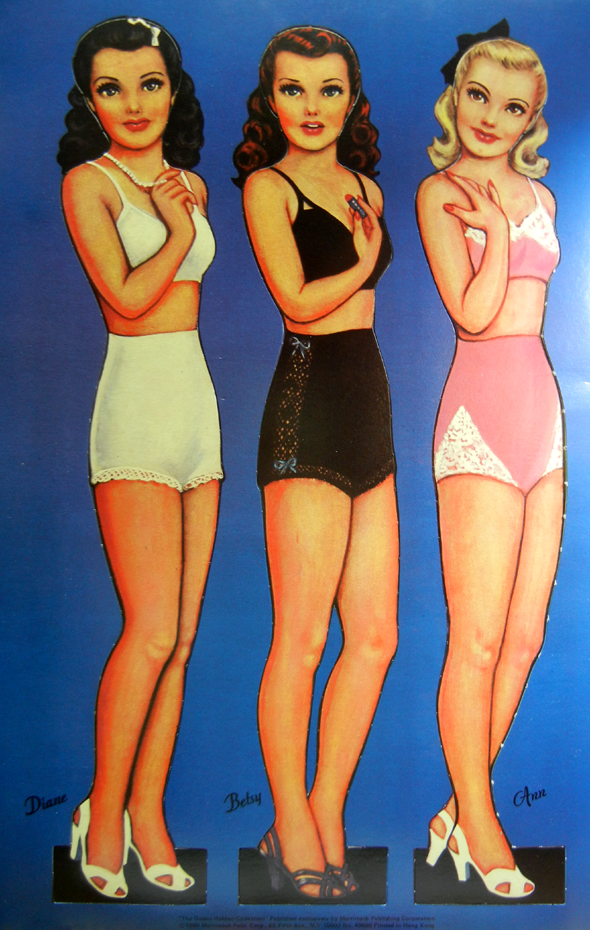